PHP/MySQL backend w/custom DB, XML output for interpretation by flash front-end, Brightcove for video service, though the client insisted on implementing Brightcove in a way tha bypassed the API’s and was never intended (oh if I had a nickel…). 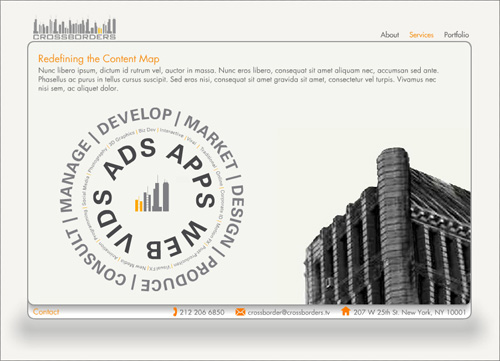 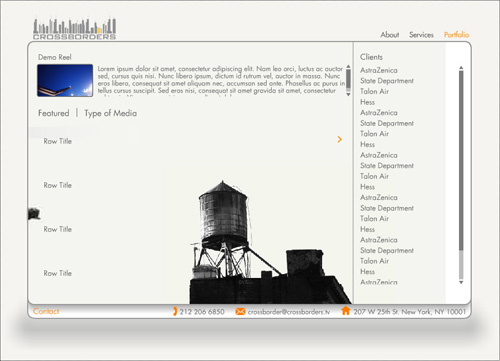 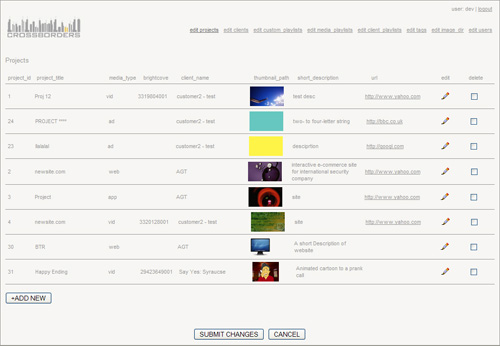 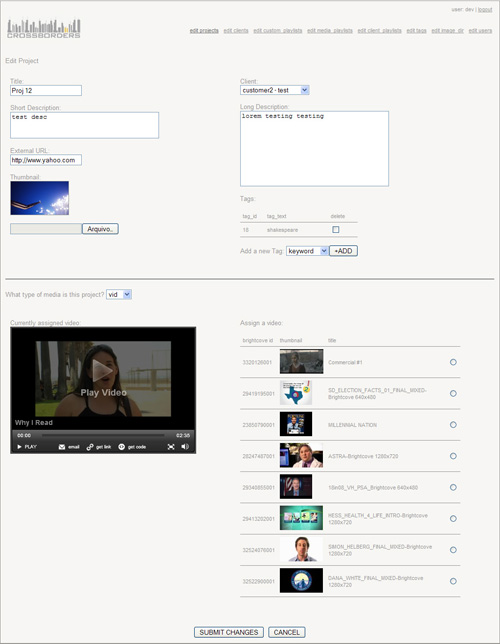 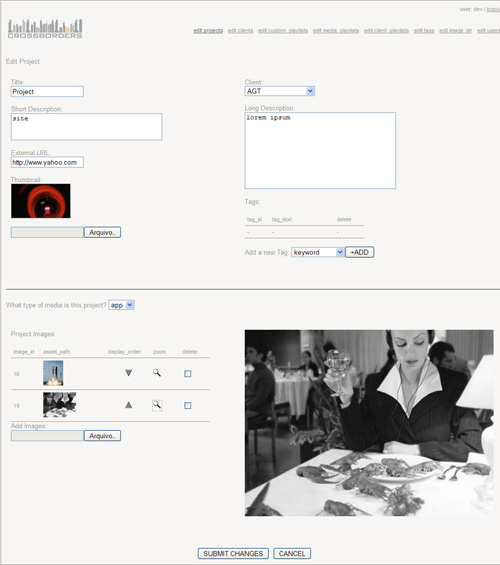 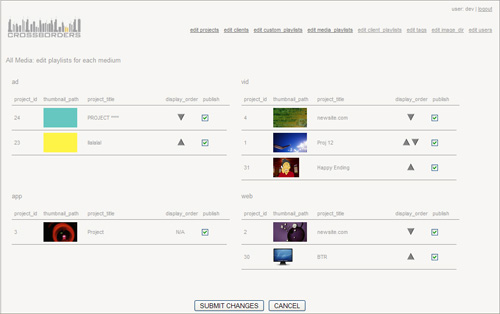 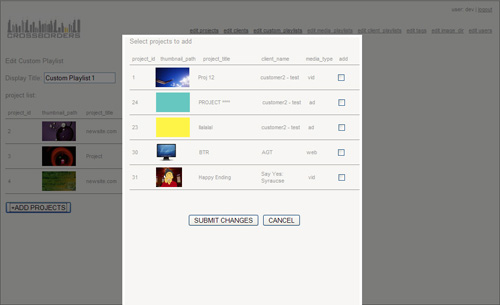 Clouds on this one were interesting. Started with a Flint particle system, which, while lovely, bogged down the animation everywhere else.Same issue with Perlin noise clouds. Switched to video. better. Browsed a few hundred cloud clips without finding anything the CD liked as much as the flint clouds. SO, rendered the Flint particles from Flash to Quicktime, converted to .flv to be played via netstream. In retrospect another solution (which might prove quicker) might be going into AE and pinch-distorting a couple cloudscape video layers.

So you or the client want to add some flash audio to some or all pages in your site. What do you do if you don’t want the loop to start at the beginning each time the page containing the .swf loads? While a truly aurally seamless solution would likely require the use of frames or a pop-up window, I came up with this for a client who wanted flash audio to play while the user was navigating a PHP store.


If you are unfamiliar with Shared Local Objects, you might want to take a gander at this tutorial first.

SETTING UP THE .FLA
Essentially, your audio.swf should be a loop which continually checks the current position of the playing audio object and defines that spot with a variable which is saved and referred to on the user’s hard drive.

Ensure that the audio elements in your library have "Export for Actionscript" checked on in the Linkage Properties.

(When invoking a function which plays audio, just use one event with the on() handler. If you use more than one, such as on(press, release){} as I am fond of doing, your audio event will occur twice, resulting in a muddy echo.)

Users are invited to create a snowflake with thew drawing tool, attach a message, and send to a friend/colleague. The recipient receives and email bringing them to the site, where their unique snowflake and message are displayed. Snowflakes are public and users can rollover to see other messages that have been sent.

I think the most interesting aspect of this was how we went about storing the snowflake data; Initially I created a test that saved out a PNG bitmap of the snowflake to be downlaodded later. The back-end folks didn’t like the number of potential database calls & http requests (rolls eyes) so what I ended up doing was defining each snowflake as a XML list of shapes with scale, rotation, x-loc & y-loc attributes. This got passed to the REST service via flash and stored in the DB. When retrieving the user’s snowflake later, flash was setup to parse the XML and recreate the snowflake with library vector shapes

This was a touchscreen kiosk developed for Chevron using Helios’ projector & touchscreen system. 4 projectors each projecting a swf, I was responsible for the content – 3 different content-type loaders which react & load appropriate swfs/flvs/imgs based on what they find in their associated xml. Another dev did the larger projected background swf & the scrolling drag-n-drop ‘shell’ into which content loads. Video is probably going to be slow here – was compressed for local loading.

Lexus – The New IS microsite


This was a viral marketing campaign launched in September 2005 for Lexus’ latest luxury model, the IS. While providing users with product information via an interactive flash interface, the site offered users the opportunity to upload their own photos to be incorporated into a mosaic image of the IS. If desired, the images could also be displayed on the Reuter’s Jumbotron in Times Square, and a photo of the displayed image taken at the time of broadcast to be emailed to the user. Developed by a team of 6 developers.

AS3, pureMVC framework, url routing with swfAddress, Omniture for tracking. Team of 3 developers


The most interesting aspect of this one was the initial animation populating the product pages, using Flash’s drawing API. Simply using trig equation easing on the tweening of the points that made up the corners of each white-outlined square resulted in a very elegant but simply achieved 3D effect.


This project entailed the conception & production of over 700 icons as a marketing tool for an IE search toolbar based on various initial icon categories given by Mediawhiz.

Client quotable: “Great stuff Ursula, but if you could do us a favor and stay away from sex, drugs, politics and religion as subject matter, that would be helpful.”

1. _root Setup>
On the _root level we have a polaroid of the band High Strung, which we want the user to be able to move & rotate. In the .fla, the name of this movieclip is "polaroid." Also on the _root level is a small transparent movieclip, called "mouseTarget" which will assist in the rotation functions.

2. polaroid>
Within the "polaroid" mc is the mc "dragElements" which contains the Actionscript and Shapes used for ‘hotspots.’ If you’ve multiple objects you want the user to drag and rotate, simply duplicate this clip and place it within each MC on the top layer & level.

3. dragElements>
There are plenty of ways one can approach defining one’s interactive areas; in this case. when the user clicks and drags the corner shapes, which are contained within their own MC, the rotating functions will be called. When they click and drag over the central square, they’ll be able to drag the polaroid about on the stage with a startDrag().

Below right is an explanation of the Functions.


Facebook users can select characters, settings and plots to create their own animated short films (which in actuality meant selecting one of a few hundred pre-rendered permutations, alas). Users can manage & share films, create playlists, watch the films of others, view behind the project scenes. The sister app was a mixer that allowed users to create their own music from a selection of samples.

Something I recall as rather neat about this one was having to come up with smart textfields that would stretch/grow/re-center/truncate/append to handle user-input of unknown length in various languages.

I think the most interesting aspect of this one was shooting myself climbing up a ladder in order to get a rotoscoping reference.

wrapping dynamic text to a curve

Short and sweet, but I’ve seen it come up on a couple of projects to stump others and myself. And really, it’s not that daunting when armed with a few right triangles and the good ol’ Pythagorean theorum.

If you want to wrap a block of text to a curve, this isn’t quite the tutorial you’re looking for, though the same principles apply – you’ll have to figure out the maximum width of each line, split the copy into an array, and loop through it creating textfields and checking their textWidth to determine where the linebreaks should occur. Additionally, you might also check out gskinner’s textflowpro.

The trick is thinking of the curve as part of a circle, and then looking at the x/y location of the TextField or Object as 2 legs of a triangle whose hypotenuse is the radius of that circle.


Which means that if we know the radius to be a constant, and we know the y-location which presumably updates incrementally, then we can easily solve for the x-location using:

One of several interactive modules I worked on for Viagra.com; 4 possible different video/polling experiences using the same SWF, dependent on variables passed in via SWFObject.